This was surprisingly hard for me to pick, but I had to go with this dork right here:

Joseph Joestar is endlessly entertaining. In spite of his previous status as a bit of a guile hero who doesn’t take things seriously, he grows as a very likeable hero, although still very human. He’s definitely the most relatable of the Jojo’s for me and I immediately became wrapped up in his story when he was introduced. Quick witted, resourceful, and hilarious, (see above), it’s no wonder that Joseph is as popular as he is. I am SO glad he stuck around for Stardust Crusaders. It would have been boring without him!

Josuke Higashikata is just as much of a dork as his old man, but comes off as slightly nicer in disposition, (in spite of his hair-trigger temper…haha…hair…geddit?) as he doesn’t kill his enemies and befriends many of them. One of the most human main characters I have seen in shounen manga, Josuke is very much an average high school kid with magical powers, but unlike many examples of this trope, he only LOOKS like a delinquent. 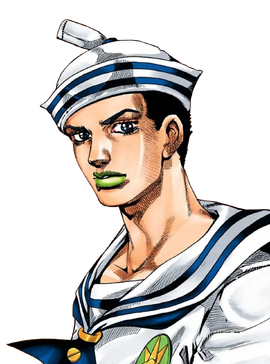 Gappy is…weird. He has no idea who he is, what he is, or who he is a fusion of. The most alien of the Jojos to date, he is nonetheless a great character and a breath of fresh air after Johnny. Although he is eccentric to the point of insanity in some cases, he is nonetheless a nice…person…thing, especially to the girl who found him on the beach, Yasuho. I look forward to see what direction Araki takes with this character.

FYI, my least favorite Jojo is this poor excuse for a main character: 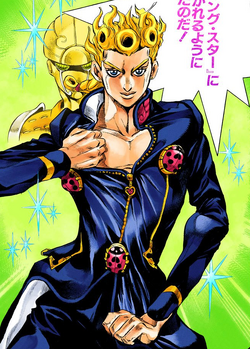